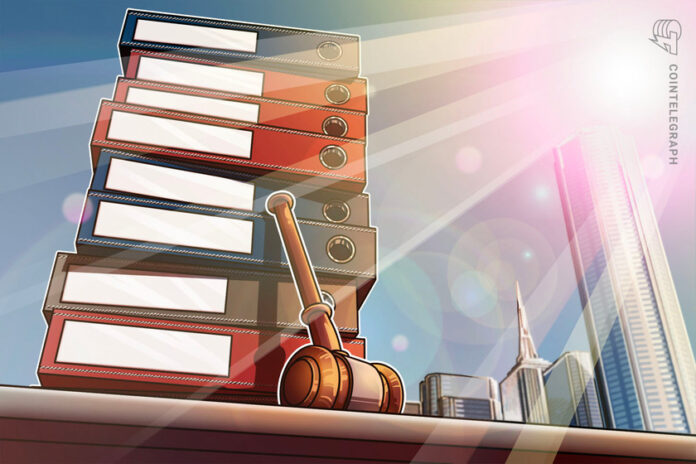 The advocacy group alleged OFAC “exceeded their statutory authority” in sanctioning Tornado Cash because the mixer was a “privacy tool beyond the control of anyone.”

In an Oct. 12 filing in the U.S. District Court for the Northern District of Florida, lawyers for Coin Center as well as crypto investor David Hoffman, an anonymous human-rights advocate known only as John Doe and software developer Patrick O’Sullivan filed a complaint against OFAC, Treasury Secretary Janet Yellen and OFAC director Andrea Gacki. The complaint alleged that sanctioning Tornado Cash was “unprecedented and unlawful,” in part, due to privacy concerns over crypto transactions.

“If a user doesn’t take proactive steps to protect his privacy, the ledger’s transparency allows strangers to track his private associations and stalk his intimate relations,” said the filing. “It invites publicization of and retaliation for his private contributions to unpopular causes. And it allows anyone to see whether he has a lot of assets, which would put a target on his back.”

3/ We intend to win this challenge even if it’s necessary to go to the Supreme Court, and we’ll keep you posted as the case unfolds. You can read more about our suit here. https://t.co/kQNgQNPkEb

Coin Center alleged Yellen, Gacki and OFAC “exceeded their statutory authority” in adding the crypto mixer to its list of sanctioned entities because Tornado Cash was a “privacy tool beyond the control of anyone.” The plaintiffs claimed OFAC “defied its own rules on the books” in imposing the sanctions in addition to violating the constitutional rights of users whose only intent was achieving some measure of privacy.

“They respectfully request that this Court hold unlawful, set aside, and permanently enjoin the enforcement of the criminalization of Tornado Cash,” said the complaint.

Among Coin Center’s reasons for the court to overrule the sanctions included donors wishing to keep their transactions private, claiming having Tornado Cash sanctioned means they are “less likely to contribute.” O’Sullivan and Hoffman, public figures in the Ethereum ecosystem, used the mixer as one means “to protect himself and his family” from the public tracking his funds as well as to avoid “potential civil and criminal liability” from receiving unsolicited tokens, respectively.

Doe, though living in the United States, has donated in crypto to pro-Ukraine causes amid the country’s war with Russia. He claimed being cut off from a privacy tool would make it more likely for Russian agents to “learn about his pro-Ukrainian activities,” potentially putting his livelihood at risk.

Coin Center’s legal team sought for the court to set aside Tornado Cash’s designation as an OFAC Specially Designated National with a “declaration that the criminalization of Tornado Cash is null, void, and with no force or effect.” In addition, they requested compensation for attorneys’ fees and other costs related to the case as well as “any other relief that the Court deems just and proper.”

OFAC added Tornado Cash as well as 44 USD Coin (USDC) and Ether (ETH) addresses connected to the mixer to its list of Specially Designated Nationals on Aug. 8. On Aug. 12, Dutch authorities reported they had arrested Tornado Cash developer Alexey Pertsev, claiming he had facilitated illicit transactions and money laundering through the mixer. TheTreasury also later clarified that publishing the controversial mixer’s code would not be a violation of U.S. sanctions

Related: Tornado Cash is the latest chapter in the war against encryption