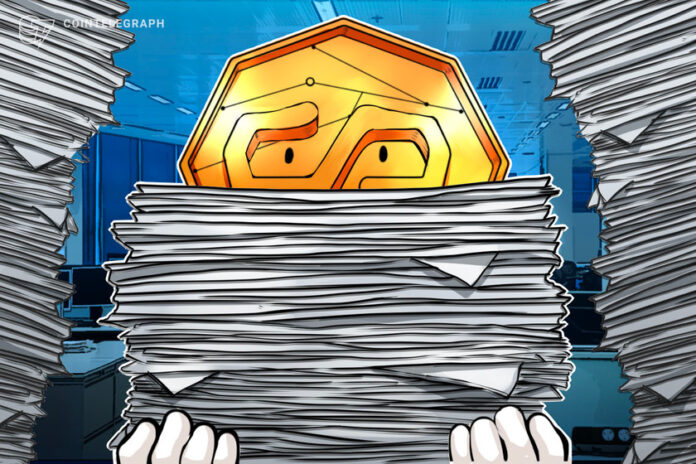 The algorithmic stablecoin ban has sparked a range of arguments in the crypto industry as it is being seen as a watershed moment.

New draft legislation on stablecoins in the United States House of Representatives proposed to impose a two-year ban on new algorithmically pegged stablecoins like TerraUSD (UST).

The proposed legislation would require the Department of the Treasury to conduct a study of stablecoins similar to UST in collaboration with the United States Federal Reserve, the Office of the Comptroller of the Currency, the Federal Deposit Insurance Corporation and the Securities and Exchange Commission.

The stablecoin bill has been in the works for several months now and has been delayed on numerous occasions. Treasury Secretary Janet Yellen has repeatedly cited the Terra collapse when calling for more regulation of the crypto space.

The Terra ecosystem failure that began with the depegging of its algorithmic stablecoin UST eventually wiped out the $40 billion ecosystem. This led to a crypto contagion that saw the crypto market lose nearly a trillion dollars worth of market value within a couple of weeks.

Markets have yet to recover from the contagion, and the Terra collapse definitely cast a shadow on the future of algorithmic stablecoins and became a hot topic for critics including certain policymakers who have been using it to advocate for stricter policies for cryptocurrencies. The latest draft proposal to put a temporary ban on such stablecoins is one such example. Under the current draft of the bill, it would be illegal to issue or create new “endogenously collateralized stablecoins.”

The draft proposal evoked mixed emotions from Crypto Twitter. While some market observers called it a good idea, which would help avoid further such collapses, others believed the Terra fiasco has put the industry back by years. Pointing toward the two-year temporary ban, some implied that even though algorithmic stablecoins might not be the culprit, the execution by the Terra team has cast a shadow on the whole algorithmic stablecoin industry.

In many ways, Do Kwon set the crypto space back by years. Most Terra fans don’t even realize that the “decentralization maxi” spiel was pure LARP – Terra was one of the most centralized L1s, and UST’s primary backing ($3b in BTC) was sitting in one guy’s wallet with no oversight. https://t.co/MJ2c7U1kgJ

Talking about the impact of Terra contagion on the stablecoin regulation, Mriganka Pattnaik, CEO of risk monitoring service provider Merkle Science, told Cointelegraph that regulators need to take a broader approach than going for a temporary ban. She believes lumping all algorithmic stablecoins together and putting a blanket ban on them will hamper innovation, stating:

“In light of Terra’s collapse and the ripple effect it created, algorithmic stablecoins will need to regain the trust of regulators and consumers alike. The regulators can push for partially collateralized models, set transparency standards, and require the issuers to submit white papers highlighting how their particular stablecoin offering works, its operational structure, mint and burn mechanism and the kind of algorithm they use to maintain the value, the unique risks the offering presents and analyze whether it can have a potential contagion effect on broader financial stability.”

Patnaik added that it is counterproductive to hold onto the notion that decentralization and regulatory controls can never be in alignment. The most proactive thing stablecoin issuers can do is “come together and propose technical solutions to regulatory problems surrounding algorithmic stablecoins.”

Jay Fraser, director of strategic partnerships at Boston Security Token Exchange, explained how Do Kwon’s action and marketing tactics were to be blamed for the bad press algorithmic stablecoins received in the aftermath, telling Cointelegraph:

“There’s the issue of how Do Kwon both marketed Terra as well as how he used user funds during and after the collapse. If there were to have been good regulation in place ahead of and during the collapse, part of it would have involved clearer messaging around the risks involved in investing money in untested technology. I think a lot of investors were perhaps not aware of the risks.”

He added that the Terra debacle set a precedent for fellow decentralized finance and crypto investors to be more transparent and “regulations will be put in place to ensure consumers and investors aren’t affected by poor practices.”

A “Libra moment” for algorithmic stablecoins

The Terra stablecoin project somewhat recalls the fate of Facebook’s, now Meta, stablecoin project Libra, which was later dubbed Diem. The social media giant got involved in the crypto space in 2019 when it announced its plans to launch a universal stablecoin whose adoption would have been elevated by Facebook’s line of social messaging apps and services including Instagram and Whatsapp.

The stablecoin was to be pegged to the value of a basket of fiat currencies including the U.S. dollar, the Great British pound, euro, Japanese yen, Singapore dollar and some short-term assets generally considered to be cash equivalents.

Facebook registered the project in Switzerland and hoped to bypass regulatory oversight from multiple nations, but unsuccessfully. Facebook faced immediate pushback from regulators across the globe and founder Mark Zukerberg even faced multiple Congressional hearings regarding the same. The name change to Diem didn’t help its cause much and the project was eventually shut down by the end of January 2022.

Like the ill-fated Diem/Libra venture, the disintegration of Terra’s $40 billion ecosystems forced regulators to show interest in the nascent industry and even forced several regulatory changes.

Just as Libra forced regulators to wake to the reality of private entities issuing money in the digital era, Terra has made lawmakers take a closer look at who can issue a stablecoin, opening the gates for banks and other financial institutions to get involved in the nascent crypto market.

Dion Guillaume, global head of communication at crypto exchange platform Gate.io, told Cointelegraph that Terra was a stress test that could benefit the industry:

“It was a huge stress test, for sure. However, I think this will eventually work out for the better. For one, crypto users need to know that when someone offers you crazy high yields, something fishy is going on in the background. Plus, projects need to know how to prioritize long-term goals over short-term pleasure. For example, many analysts have pointed out the flaws in Terra’s UST stablecoin creating a capital-efficient, decentralized stablecoin is impossible, yet users continued to use Terra, and projects continued to build on it. Let’s hope the industry learns a lesson from this setback.”

Jason P. Allegrante, chief legal and compliance officer at Fireblocks, explained that quite similar to what Diem did for regulators, Terra’s failure has accelerated Congress’s drafting of a promising bipartisan bill. He told Cointelegraph:

“We can see in hindsight that it accelerated Congress’ drafting of a very promising bipartisan bill, which will introduce stablecoin legislation, significantly normalizing the industry in the process. Not only is this a direct response to Terra’s collapse, but the impact will be transformative, providing clarity on the regulatory classifications of stablecoins, what quantity and quality they must be reserved in, how they will be backed by other assets and so on.”

He added that the experience from the Terra implosion will unleash innovation in true stablecoin products and ultimately “drive more organizations and individuals to invest in cryptocurrencies and related technologies in the coming years.”

The Terra collapse might have led to a crypto contagion, but it created a watershed for the stablecoin industry. It has forced policymakers to look at the broader picture and find better ways to protect consumers. It has also ignited interest from policymakers in the distinct and complex nature of the industry and made them realize that a common policy won’t work for the whole industry.